My11 is a FREE to play predictor football game. Prizes to be won! The Coronavirus has rocked the football world, but lovers of Naija football have received a piece of good news as Super eagle goalkeeper Francis Uzoho has returned to training after injury layoff.

The 21-year-old suffered a horrific injury in Nigeria’s friendly match against Brazil, after he landed awkwardly on his knee, while he was trying to save a cross. He was stretched off the pitch moments later.

Uzoho posted a video on his Instagram of himself training at home, tagging his Super Eagles teammates Henry Onyekuru, Chidozie Awaziem, Kenneth Omeruo, Kelechi Iheanacho Wilfred Ndidi and Victor Osimhen with the caption with the caption “Something way Dey body Dey body jare … the boy is back, make una no worry i go allow make una score the first day.”
Comments (0)
03/04/2020 16:17

Eberiche Eze makes the team of the season

Nigerian-born midfielder Eberiche Oluchi Eze has been named the EFL Championship U-23 Team for the 2019-2020 season.

The Naija prospect, who already met with the president of the Nigeria Football Federation (NFF) about playing for the Super Eagles, has been in great form all season, you can call this call up a reward for his impressive performance.

Our beloved, former captain of the Super Eagles, Austin “Jay Jay” Okocha has won the award for the best Premier League strike by a Nigerian, beating the likes of Nwankwo Kanu and Yakubu Aiyegbeniu.

Okocha’s solo goal for Bolton against West Ham United in 2003, where he took the ball from his half and ran towards the opposition’s goal area before unleashing a powerful strike, has been ranked the best goal in the English top-flight division.

Finidi George’s perfectly timed chip from outside the box for Ipswich Town against Sunderland 2001 is ranked second on the list. Wilfred Ndidi’s long-range strike against Stoke City last year is number 3.

Yakubu Aiyegbeni’s goals for Blackburn against Swansea 2011 was voted number 4. Sone Aluko’s volley for Hull City against Newcastle in 2013 is number 5. Efan Ekoku rounded Everton’s goalkeeper in 1993 to seal the number. Obafemi Martins left-footed screamer for Newcastle against Tottenham in 2007 is number 7.

Nwankwo Kanu’s cheeky goal for Arsenal against London rivals Chelsea in 1999 is number 8, while and Kelechi Iheanacho’s curler for Manchester City from the edge of the box against Southampton 2016 also made the list. 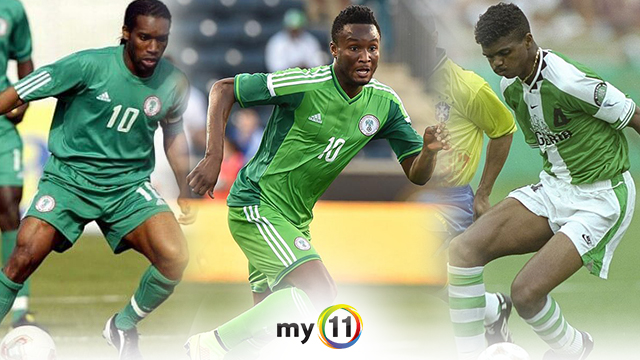 Is Mikel the greater than Okocha or Kanu?

Our beloved Super Eagles legend - Daniel “The Bull” Amokachi, has sparked controversy between Naija football fans, he claims John Mikel Obi, not even ‘Jay Jay’ Okocha or Nwankwo Kanu, is the greatest Nigerian player, off all time.

We believe, Okocha is regarded as one of the most talented footballers of all time, Kanu is one of the most decorated African players, but in an interview with Brilla FM, Amokachi believes Mikel is the greatest Nigerian player.

“Mikel is the greatest player. He has won everything that a player can hope to; the Champions League, Europa, Afcon in 2013 and he also captained the national team. As a footballer, your laurels count and that will surely count for Mikel because nobody has won that much in Nigerian football.”

Mikel Obi has had a stellar career thus far, winning every major competition, including the UEFA Champions League. He represented Nigeria at two different World Cup tournaments and was part of the team that won the 2013 AFCON. He also won medals for the nation at underage tournaments. 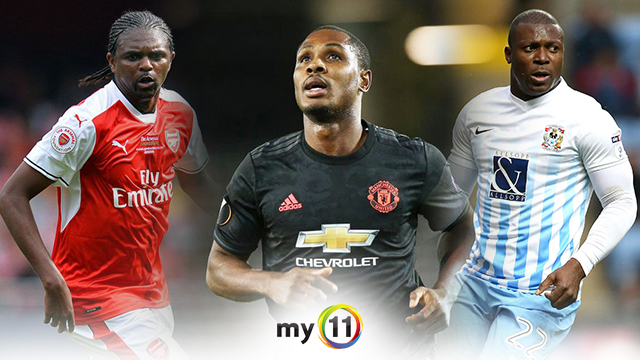 Several Super Eagles footballers – past and present – have played in the Premier League, but here we take a look at the top 10 goalscorers from Nigerians in the EPL.

10. Odion Jude Ighalo, who has 16 Premier League goals. All his goals came from his time with Watford, as he is yet to score for the Red Devils in the league.

9. Kelechi Iheanacho in number nine on the list with 19 Premier League goals.12 of his goals came in his two years stint with Manchester City. He has scored 7 with his current club Leicester City.

8. Victor Moses, who has scored 20 goals. Victor Moses played for 5 different EPL teams, and he scored at least a goal with all of them. 1 goal with Liverpool and West Ham, 3 goals with Stoke City, 7 goals with Chelsea, and his best return was with Wigan Athletic where he scored 8 goals.

7. Victor Anichebe, who was part of the team that won Silver at the 2008 Olympic Games, is number 7 with 27 goals. The 31-year-old striker played for 3 different EPL teams and he scored for all. 3 goals with Sunderland, 6 goals with West Brom and 18 league goals with Everton.

6. Obafemi Martins is 6th with 28 goals. Obagoal played for 2 EPL teams. His cameo appearance with Birmingham did not yield any goal, but he scored all his Premier League goals with Newcastle United.

5. Peter Osaze Odemwingie in number 5 with 36 goals. He featured for 3 different team in the Premier League, scoring 1 goal for Cardiff City, 5 goals for Stoke City and 30 goals for West Brom.

4. Shola Ameobi in 4th with 43 goals. The 38-year-old played for 2 teams in the Premier League but he scored for only 1. He played just 4 games with Crystal Palace, but he enjoyed his career with Newcastle, where he scored all the goals.

3. Efan Ekoku is 3rd with 52 goals. Many Nigerians may not know him, but he played for the Eagles 20 times and scored 6 goals. He featured for 2 teams in in the Premier League, scoring 16 goals for Norwich City and 37 for Wimbledon.

2. Nwankwo Kanu is 3nd with 54. Papilo played for 3 teams in the EPL and he scored for all. He scored 7 for West Brom, 17 for Portsmouth and 30 league goals for Arsenal.

1. The highest scoring Nigerian in the Premier League history is Yakubu Aiyegbeni, who scored 95 EPL goals. The Yak featured for 4 teams, he scored 17 goals for Blackburn, 24 for Middlesbrough, 25 for Everton and 29 for Portsmouth. 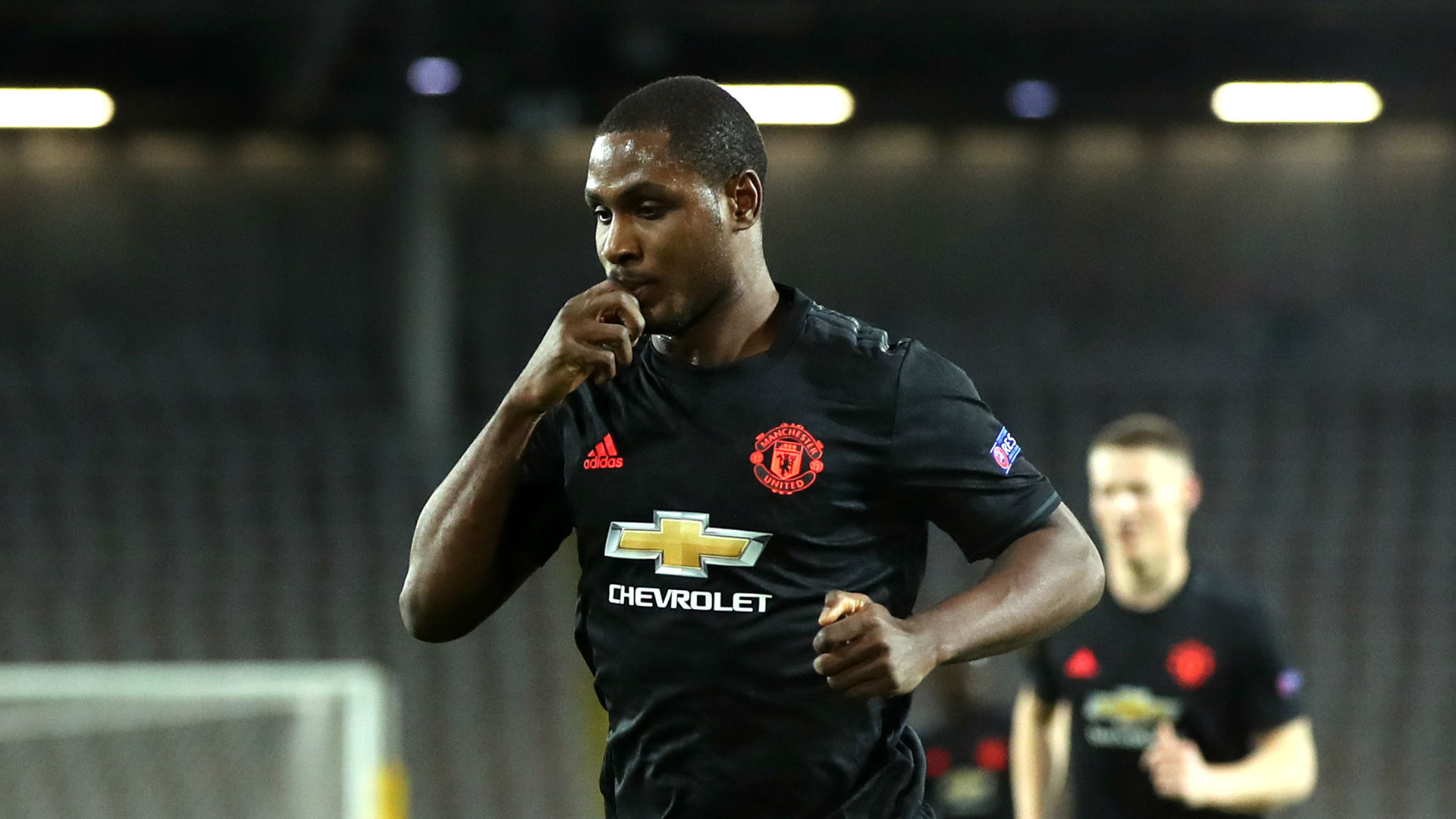 Odion Jude Ighalo, who is on loan with Manchester United, has been offered N178m weekly, by Chinese club Shanghai Shenhua, to stay.

Shanghai Shenhua are offering to extend his contract with a two-year and £400,000 weekly. They want Ighalo to reject the permanent move to Manchester.

His loan will expire on the 31st of May 2020, and is hot cake at this point as we hear that the Red Devils still want him. 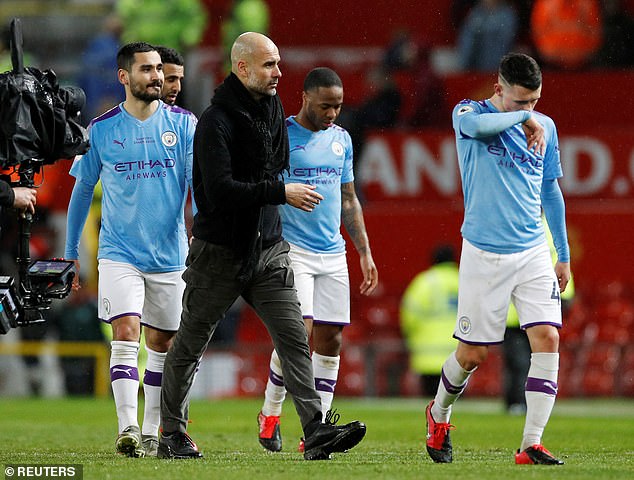 Man City is being bullied out of the UCL by Mourinho, Solskjær, Dyche & co.

UEFA have taken Manchester City out of all continental competitions for the next two years. The Cityzens may still compete, pending the verdict from the Court of Arbitration for Sports(CAS), still the top 10 teams are joining forces to keep the Etihad team out.

All this happened because City breached the Financial Fair Play rules, long story short – maybe, their owner had too much money and it missed road somehow. According to reports from Sportsmail, all the top 10 EPL teams, minus Sheffield United, are putting pressure on the CAS to enforce the ban from next season.

My11 pick Nigeria’s best XI for this season

The 2019-2020 season may have ended abruptly, but some Super Eagles players had a good season, and here My11 have picked the best eleven from Nigerian players abroad.

Goalkeeper | Daniel Akpeyi (Kaizer Chiefs) | The 33-year-old star has featured in 19 league games for this season and concedes an average of 0.8 goals in 90 minutes. He also kept 9 clean sheets with his best moment coming in the Soweto Derby.

Right Back | Kingsley Ehizibue (FC Cologne): The new Super Eagles star earns this spot ahead of Ola Aina and Chidozie Awaziem, for his impressive performances this season, making 24 appearances in all competitions for Cologne. He averages 3.1 tackles per game and has won 265 of the duel he has faced this season.

Centre Back | William Troost Ekong (Udinese) | The 23-year-old has made 23 league appearances for Udinese, with an average of one tackle per game and has made 110 clearances which is the seventh highest in the Serie A this season.

Centre Back | Semi Ajayi (West Brom) | The 26-year-old edges out Kenneth Omeruo with 35 league appearances, and he has been playing an important role in West Brom chase for promotion. He has a tackle per game, scoring five goals.

Left Back | Jamilu Collins (Paderborn) | Only 2 players have won more duels than Collins in the Bundesliga this season. He has featured 21 times for Paderborn this averaging 2.1 tackles per game and 0.8 shots per game.

Midfielder | Wilfred Ndidi (Leicester City): arguably Nigeria’s best player this season. He makes the Leicester team more balanced when he plays and it was evident when he got injured. He currently has made the most interceptions in the Premier League this season, while he also has the fourth-highest number of tackles.

Midfielder | Joe Aribo (Rangers) | Aribo has made 47 appearances this season, scoring 9 goals and providing 8 assists. He has played in 6 different positions this season and he is one of Steven Gerrard’s favourite players.

Left Winger | Moses Simon (Nantes) | On loan from Levante, Simon has been a nightmare for Ligue 1 full-backs, while his work rate is impressive also. He has played 30 times for Les Canaries this season, scoring 9 goals and providing 8 assists.

Right Winger | Emmanuel Dennis (Club Brugge) | Dennis is one of the breakout stars of this campaign, scoring a brace against Real Madrid in the Champions League at the Santiago Bernabeu.

Striker | Cyriel Dessers (Heracles Almelo) | Like Ehizibue, Dessers just got his first callup, before it was postponed. Dessers has scored 15 goals in 26 league games (more than any Nigerian player). He is the top scorer in the Eredivisie and has a hand in 50% of the goals Heracles have scored this campaign. 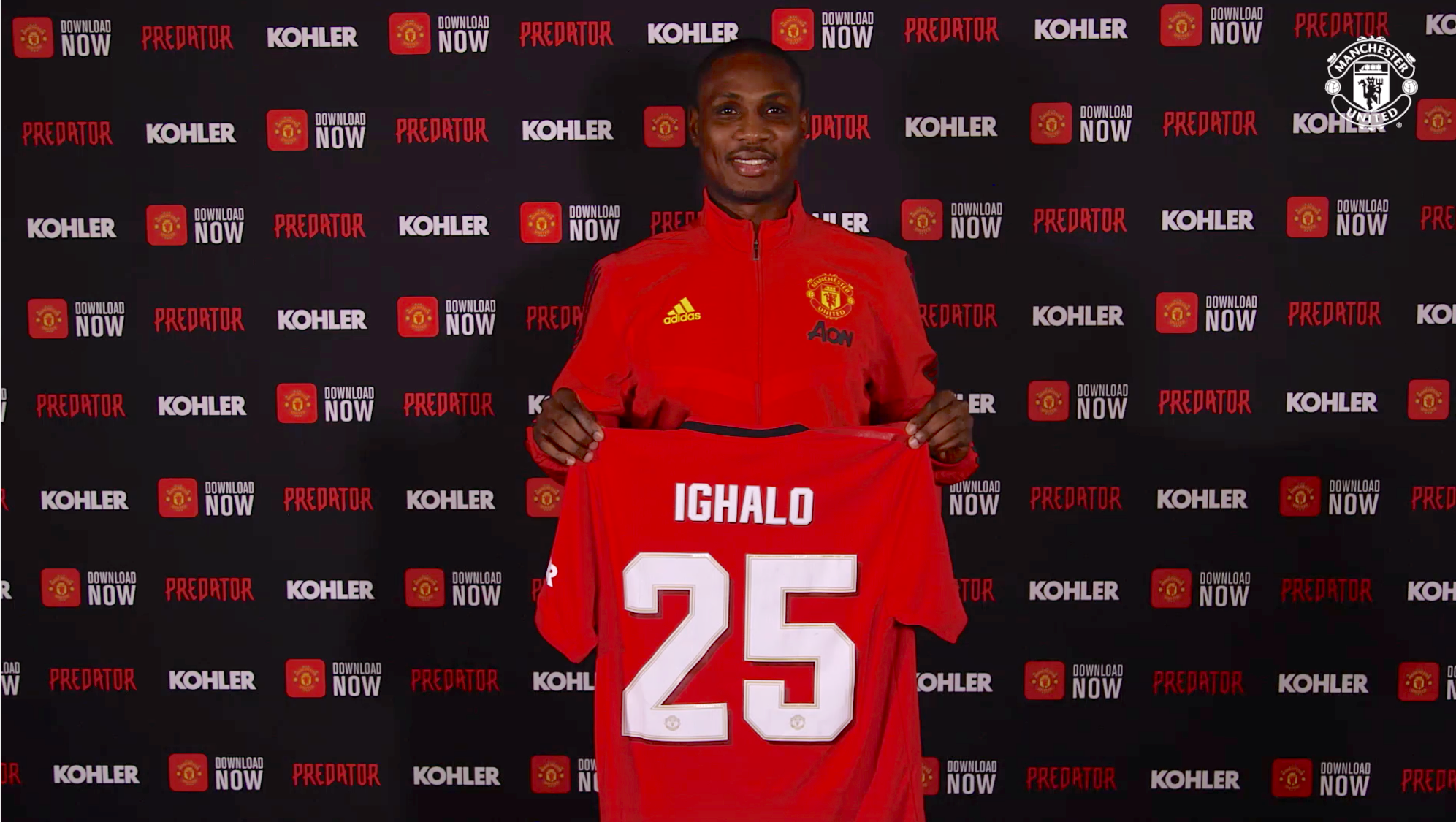 Good news for former Super Eagles striker Odion Jude Ighalo as Manchester United are ready to sign the 30-year-old permanently after his impressive performances for the Red Devils.

Ole Gunnar Solskjaer has been waxing lyrical about Ighalo, whose loan deal will end on the 31st of May 2020, Manchester United are set to sign the Nigerian permanently for 6.4 billion Naira (£15 million).

According to reports from Sportsmail, Manchester United are going to renegotiate with Ighalo’s parent club Shanghai Shenhua in the summer, as there is a willingness at Old Trafford to hold on to the Nigerian.

Ighalo has featured for Manchester United 8 times, starting only 3 and he has scored 4 goals and provided 1 assist. A list of the top 10 African dribblers in the French Ligue 1 was compiled by OPTA Stats.

10. Our Super Eagles forward Samuel Kalu made the list. The 22-year-old Nigerian, who has featured 20 times in the league this season, is 10th on the list of the top 10 best African dribblers in the French Ligue 1 after completing 48 dribbles, 22 dribbles behind number 1.

9. Bouna Sarr, who can play for both Senegal and Guinea, has completed a total of 49 dribbles for Olympique Marseille this season.

7. The number 7 position is shared between Algeria’s Zinedine Ferhat, who plays for Nîmes, and Ivorian-born Angelo Fulgini, who plays for Angers. Both of them have successfully dribbled past their opponents 50 times.

6. Denis Bouanga of Gabon takes the number 6 spot with 58 successful dribbles for Saint-Étienne this campaign.

4. Another Angers player Sada Thioub, who is a Senegalese national is number 4 with 61 dribbles completed.

3. Here is another Senegalese Opa Nguette, who can play as an attacking midfielder or as a striker, and he has completed 63 dribbles for Metz this season.

1. The best African dribbler in the French Ligue 1 is Dijon’s Mounir Chouiar, is of Moroccan and Mauritanian origin. He has completed a total of 70 dribbles this season.
Comments (0)
23/03/2020 11:06
About Us | Advertise | Privacy | Terms of Service | Contact Us